Russia's in the House 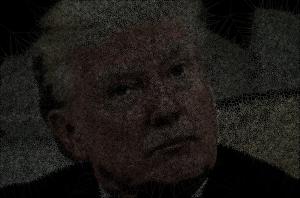 Vorotrans art from politics vorotrans images collection presenting a portrait of a man. Russia's in the House shows U.S. President Donald Trump listening to questions from the media as he meets with Colombia’s President Juan Manuel Santos (not pictured) in the Oval Office in Washington, DC, U.S., May 18, 2017. The truth about the Vladimir Putin Donald Trump relation remains unknown in North America. At a time where Donald Trump is under investigation for ties to Russia, the new Vorotrans art movement is launched. In Vorotrans art, only space partition frontiers are made visible. Such partitioning of the 2-D space is called Voronoi diagram. It is named after the Russian and Ukrainian mathematician Georgy Voronoy.

This Vorotrans digital artwork has been produced for U.S. President Donald Trump personally and therefore it is only available for him to purchase here online at http://oifii.org/ha-org/2017/10/03/russias-in-the-house/.