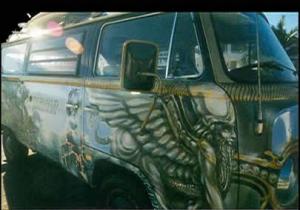 Human Aware Corporation was founded as a non-profit organization back on January 1 of year 2000 in Santa Barbara, California.

Armed with 172 .com .net and .org domain names back then, I chose not proceed with the deployment of these websites then.

Only in 2017, I realized the technology I had back then can produce great transparent voronoi diagrams derived from digital content. The vorotrans algorithmic art was born.

My brother and I started Offworld Art and Offworld Software back in 1987 in Boston, Massachusetts. At that time, I thought that the revenues generated by the software I developed would provide funds for creating art. But nowadays, I understand it must be the revenues generated by art that provide funds for creating software. Software development is extremely costly.

I created Offpub Publishing International in Quebec City, Canada back in fall 1989 with the mission of publishing great music compositions. I was seeking to build a catalogue of music works from multiple authors, but between 1989 and 1992, I was exclusively publishing the music works of my brother Carl Poirier.

I had to legally fight for Socan to give us our royalties on time so we could develop our business. I have been very upfront describing my business plan to Socan. In this time frame, at a Socan Toronto meeting, Carl and I had the same voting power as Celine Dion, Gowan, etc. We had the maximum voting power just like these music records selling stars.
But in 1991, Socan retroactively changed its bylaw for distributing royalties and thereby was shutting us down. They were not encouraging the diffusion of experimental music anymore.

My brother and I stopped the production of experimental music concerts.

In summer 1997, my brother came to me asking for the full copyright of his music work I published and promoted back between 1989 and 1992. We were sharing 50/50 the copyright on his music work. When I called Socan to do that transaction of emptying Offpub Publishing's catalog and cancelling my share of the copyright ownership, they said “It does not work that way” and something like “This cannot be done”. I said just do it, give back to the artist his full copyright. I guess my brother was happy.

In summer 1997, Laval University also kicked me out of the Ph.D. Program, so I sticked to my long time dream of making it to California. Went three weeks to Silicon Valley looking for a job presenting myself as Offworld Technologies Corporation's CEO in my resume. Got approximately 50 interviews and a few job offers but did not yet accept any. Once back in Canada, my phone kept ringing and companies like ESRI and Compact Computers flew me in for interviews. I had to turn their offers down because nor Houston Texas nor Redlands California interested me. Aside from a job, I needed a beach, the ocean, dolphins and palm trees.

In fall 1997, there was also the mother of my daughter suing me since she heard about the figures I was making in California. I tried to have shared custody but the family court judge ruled against me. The complainant's lawyer was presenting me, Offworld Technologies Corporation's founder, as an eccentric and delusional since I had secured so many different names and trademarks for Offworld Technologies Corporation. For one trademark, I had secure Offworld Virtual Being. The judge, the lawyers and the mother of my daughter did not have faith in Offworld Technologies Corporation. For them, I wanted to be involved in too many types of businesses. Books, Audio, Video, Software, Artificial Intelligence, Mapping for Governments, etc. I guess, a little like Howard Hughes, who wanted to do great Art and great Engineering, or a little like John Nash, who wanted to do great Research, I wanted to do too much too fast. I was fuelling my rocket.

So, I made it to Southern California.

Between fall 1997 and June 2001, see https://fineartamerica.com/blogs/cheers-to-hefners-quote-today-on-playboycom.html for details about my dream I followed.

Came back to Canada in June 2001. For 16 years i developed software and gave it for free open source to the world, fuelling my rocket and waiting for the proper timing to re-insert into business.

This summer, I removed a few software libraries and applications from my github account https://github.com/oifii and from my http://www.oifii.org/ns-org/nsd/ website.

This fall, I changed business model, I plan on selling vorotrans art to fund my artificial intelligence software development projects at OIFII.ORG.
With HumanAware.ORG, I want to redistribute significative royalties to individuals, photographs and publishers involved in the digital images and videos from which vorotrans art is derived from.

For decades to come, HumanAware.ORG wants to secure a significative income for individuals involved in the digital images seeding artificial intelligence algorithms.

The rocket is launched.